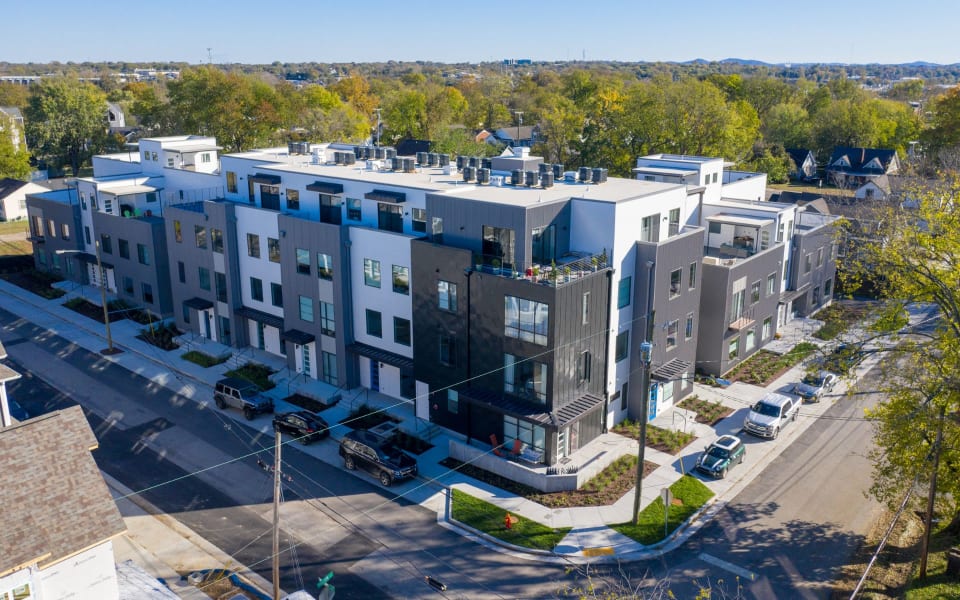 In 2014, Core Development decided to focus its urban revitalization efforts in Wedgewood-Houston. We purchased just over nine acres of land and started to build Nashville’s first live/make community called The Finery.

The concept fit the culture of the urban neighborhood and resulted from a charrette we held with neighborhood leaders, business owners, and Nashville Metro Planning Department members to help us with a master plan.

Seven years later, Segment, our third in a series of development projects in Wedgewood-Houston, has been recognized with a 2021 Excellence in Development Award from the Urban Land Institute Nashville.

The multifamily development sits at the corner of Pillow Street and Merritt Avenue, on the edge of Wedgewood-Houston’s residential area. It has 34 units, combining flats and condos, priced from $239,000 to the $500,000s to attract Nashville’s urban workforce and young couples.

Judges for the Excellence in Development Awards cited Segment as a good example of urban infill design. They liked the selection of materials and that the building reflects the industrial character of Wedgewood-Houston. The success of Segment is also validation that if you engage, listen, and respond to the community, you can create something that benefits the neighborhood and the developer.

Before launching the project, we really looked at how this multifamily structure would be compatible with the neighborhood, who would want to live there, and how we could make it affordable. We considered the intricacies of the plan and fitting it into the neighborhood.

We oriented the building to the street and still achieved three sides of light and air. Townhomes are in a quad, allowing homeowners to have light and privacy and it makes the development more interesting. Rooftop terraces and extensive outdoor space provide places where people can meet and gather.

Through intentional planning, we created a lot of value in the space and all units were sold by the time construction was completed.

Our Core Development team is committed to bringing energy, life and commerce to Nashville’s urban neighborhoods. It is extremely satisfying for us to create a successful multifamily development like Segment. It is doubly rewarding when that work is applauded by an organization like ULI and 500 of your peers gathered on the outfield at First Horizon Park on an October evening for the Excellence in Development Awards.